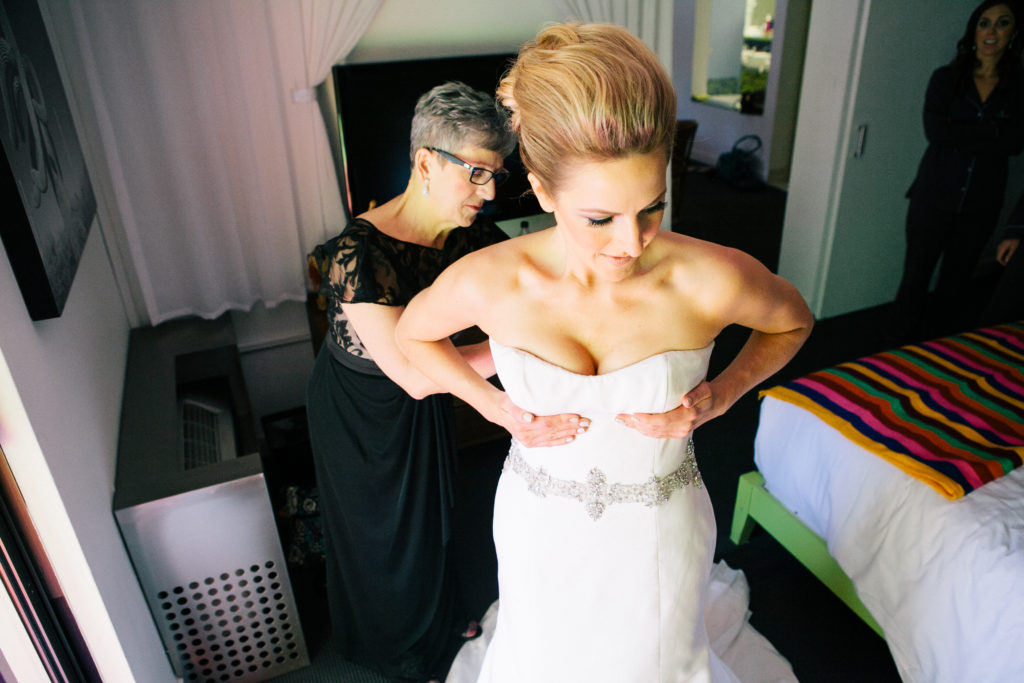 I wasn’t the bride who grew up dreaming of wedding dresses. I never pictured myself in a specific dress or even went as far as thinking about styles that I liked or disliked. It wasn’t until I was 23 years old that I learned just how many different styles and designs of dresses are actually available to brides. Up until that point, I had only been to one wedding and I wasn’t mildly interested in the bride’s “Say Yes to the Dress” experience. My 23 year old self had no idea how much wedding dresses and “Say Yes to the Dress” would become part of my life. 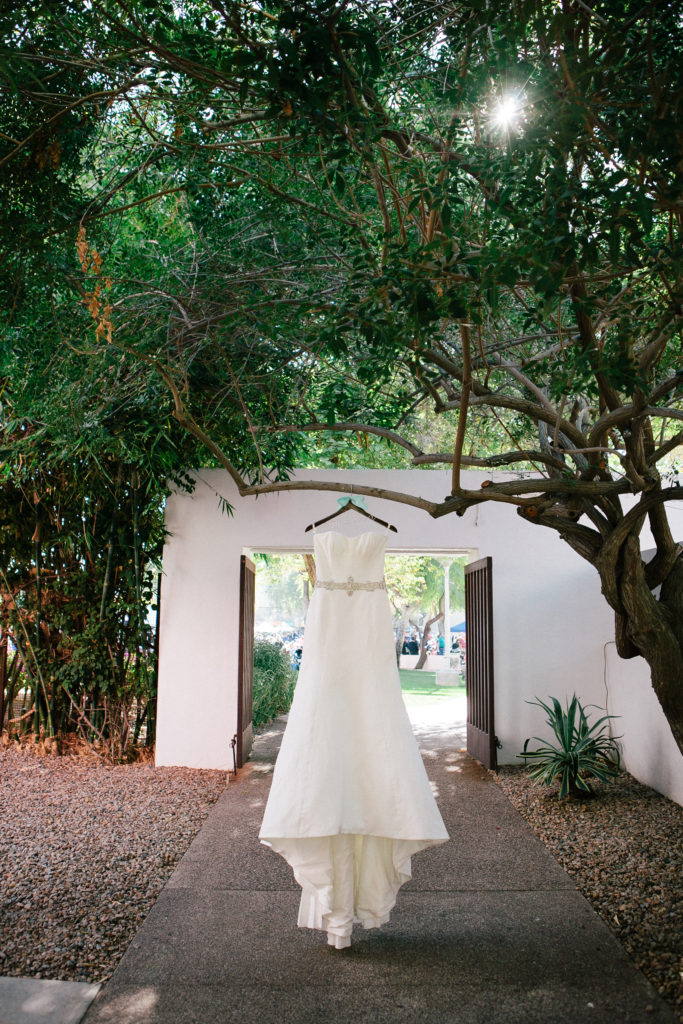 During the winter of 2008, I was living in New York city with my best friend, Megan, trying to make ends meet and just hoping I could afford some Christmas presents for my family. (I sound so dramatic. What I’m not telling you is that this was the beginning of the recession and I was taking full advantage of all the sales and my Bloomingdales “double discount days” from work. Yes, I didn’t know if I could afford Christmas presents for my family because I had to have that plum colored Marc Jacobs purse that came out to a heavy 65% off discount. It was still very expensive. Oh, to be young again.) My roommate was working at American Laser and met the sweetest Latina, who instantly fell in love with Megan (everyone does) and wanted to hire her as a receptionist at the bridal boutique that she managed. Megan took down her information and passed it on to me. I absolutely loved my boss Eliana, who is the exact type of business woman you would expect working at one of the nation’s most elegant high-end designer bridal boutiques. She is one of the most put together, genuine and gorgeous women I’ve ever met, who was also as equally as fierce and intelligent. I began working for her part time on the weekends and after a few weeks of working at Priscilla of Boston she wanted to make me her assistant store manager. I turned down the job, only to be laid off at Macy’s Merchandising Group (MMG) less than a month later. I thought it was the universe trying to tell me something. I turned down a new job at MMG and accepted a position as a Bridal Consultant at Priscilla of Boston.

I participated in a Bridal Consultant training that lasted weeks before being able to work with my own clients. I learned all of the details like styles, fabrics, design that went into all of the different labels that Priscilla of Boston offered, which were Platinum, Priscilla of Boston, Melissa Sweet, and Jewel. Platinum was the highest-end of dresses offered there. I rarely showed it to my clients. The gowns were very modern with cathedral length trains, a ton of bead work and crystals, and most involved heavy layers of the richest fabrics. The Priscilla of Boston line was made up of the classic dresses that gave Priscilla of Boston their name for making Grace Kelly’s wedding dress of alencon lace and taffeta. I appreciated these dresses for the hand-made lace, but they were a bit too formal for my taste. Melissa Sweet was lovely, sweet dresses that were a bit bohemian-chic with a southern flair. I imagined this bride getting married outside. Lastly, Jewel dresses were versions of all of the other lines, but made slightly less expensive in order to have a lower price offering, which was still between $1,000 -$3,000. By the end of the training I had all of my friend’s wedding dresses picked out for them in my head completely based on their personalities. I learned how to meet someone, provide an actionable consultation, receive their wedding details, and find the dress all within 50 minutes. 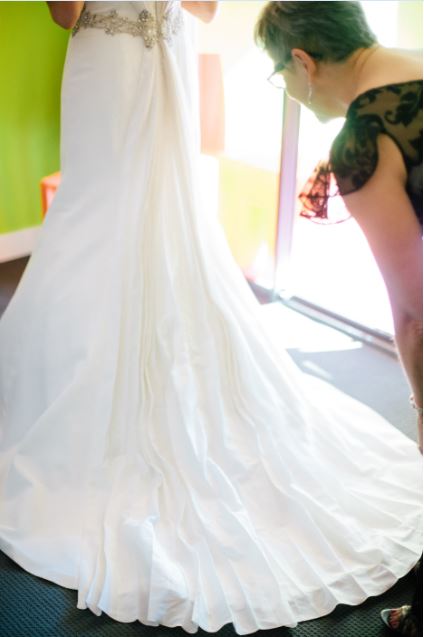 Although I didn’t love the job in the end, I actually found my wedding dress through this crazy process. I know what you’re thinking, and you’re right – I did not know Aaron existed at the time. It was actually a little over two years before Aaron and my first date when I found the dress. One of the exercises that us Bridal Consultants did was mock appointments. We had an hour every weekday blocked off for all consultants to come together and practice an appointment. One person was the consultant, one was the bride and the rest were either the family to the bride or helpers to the consultant. This particular Tuesday, the assistant manager wanted us to switch it up and practice with a dress that never sells at the New York City store where we worked. It was PL210 from the Platinum collection, so expensive, so heavy, but minimal beading and not as long of a train as most Platinum dresses. We came up with an entire story for the bride, where she’s getting married, how large her wedding is, does she want a veil, etc. Unfortunately, I pulled the short straw and had to be the bride. No one enjoyed being the bride. The consultant helped me into the dress and I didn’t even look in the mirror in the changing room. I was so far from the idea of marriage that it was just part of the job. But, when I walked out into the viewing room with “my family” and I heard the gasps and saw the expressions on their face, I knew that this was something special. I had seen those expressions before during my consultations with real brides. I started doing all of the things that brides do. I couldn’t stop touching the fabric, spinning to see the back, asking to try on jewelry, shoes, veil, and talking about the details of my (fake) wedding. It was a bizarre out of body experience. I took a photo on my phone and sent it to my roommate and one of my best friends from home. I wish I still had that photo.

[ngg_images source=”galleries” container_ids=”164″ sortorder=”1574,1573,1572,1571,1575,1576,1567,1568,1569,1570″ display_type=”photocrati-nextgen_basic_slideshow” gallery_width=”600″ gallery_height=”400″ cycle_effect=”fade” cycle_interval=”10″ show_thumbnail_link=”1″ thumbnail_link_text=”[Show thumbnails]” order_by=”sortorder” order_direction=”ASC” returns=”included” maximum_entity_count=”500″]Fast forward to a little over three years later. I had a feeling that my live-in boyfriend at the time was going to propose and I panicked because Priscilla of Boston recently went out of business. I knew I could never afford PL210, but now even if I won the lottery where would I find it? I searched all of the pre-owned wedding dress sites, but they were either a size 2 or altered to fit someone who was under 5’4″ or wore a size d-cup. Then I heard about a company on the east coast that actually bought up a bunch of old sample dresses that were in great condition and sold them for 90% off retail. I found PL210 on their website! In the sample size, which I knew I fit into because I’ve tried it on before! I checked back a couple days later and it was gone. So, I called and they had to look in their backstock and call me a couple days later. Thankfully they had the dress and confirmed that it was in new condition. I remember the next day going with my mom to a charity walk that was held at the mall. I nonchalantly reminded her about this dress (oh, she remembered) and told her about how crazy I am for calling this store to locate it. I expressed concern that if I wait to purchase it, it might never be available again for as long as I live (again with the dramatics.) She reassured me that I wasn’t crazy and offered to buy the dress! Of course, since she bought my sisters for her wedding and it’s only fair. She also knew a little secret about the man I was living with and the ring that he was hiding in his snowboard boot. More on that in a future post. SECRET: I may or may not have helped my mom provide her credit card information over the phone just days before Aaron proposed. I’m not saying that I purchased a wedding dress before being proposed to because that would be crazy. However, I am saying that as a woman who is true to her personal style and knows a good deal when she sees one, I definitely did not let a great opportunity pass me by.

Other details and information… 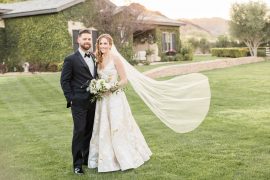 Wedding: The TOP 5 Must Haves When Planning A Wedding 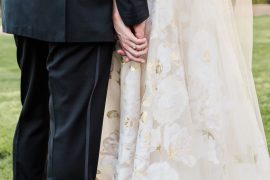 5 Year Wedding Anniversary: What Would We Do Differently… 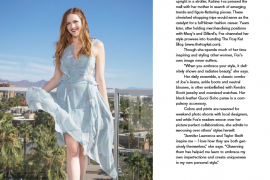 So Scottsdale! Magazine – Her Style Feature