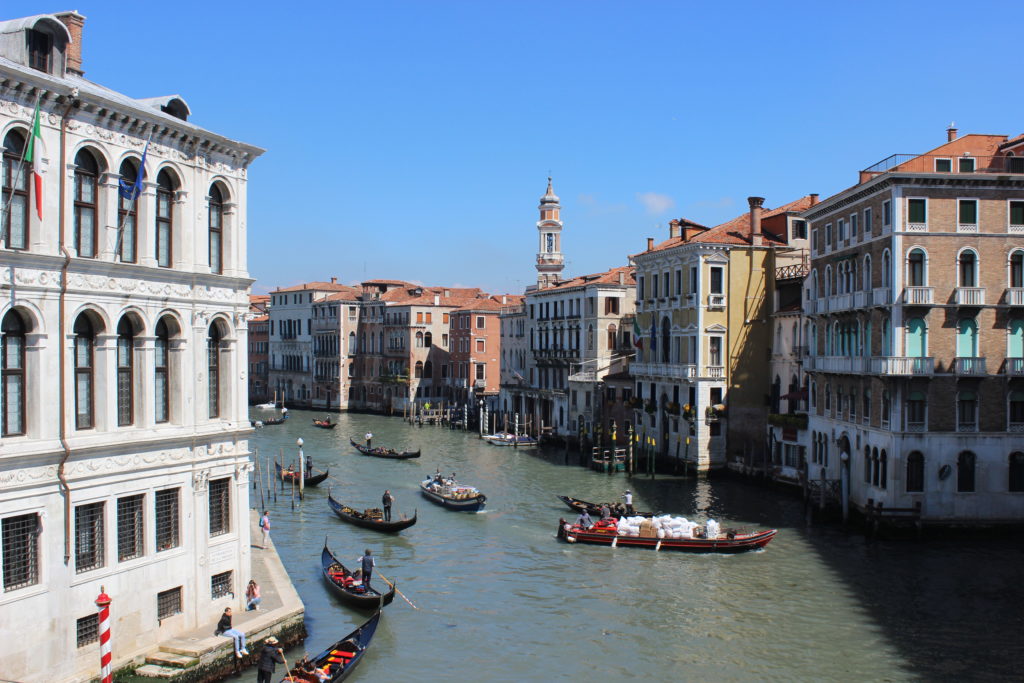 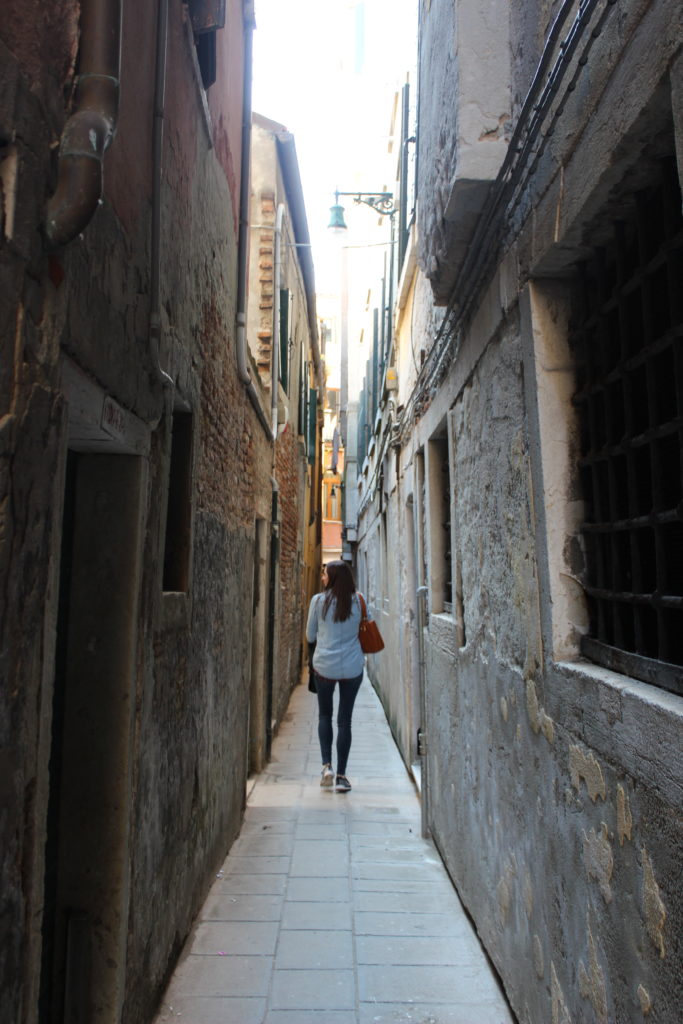 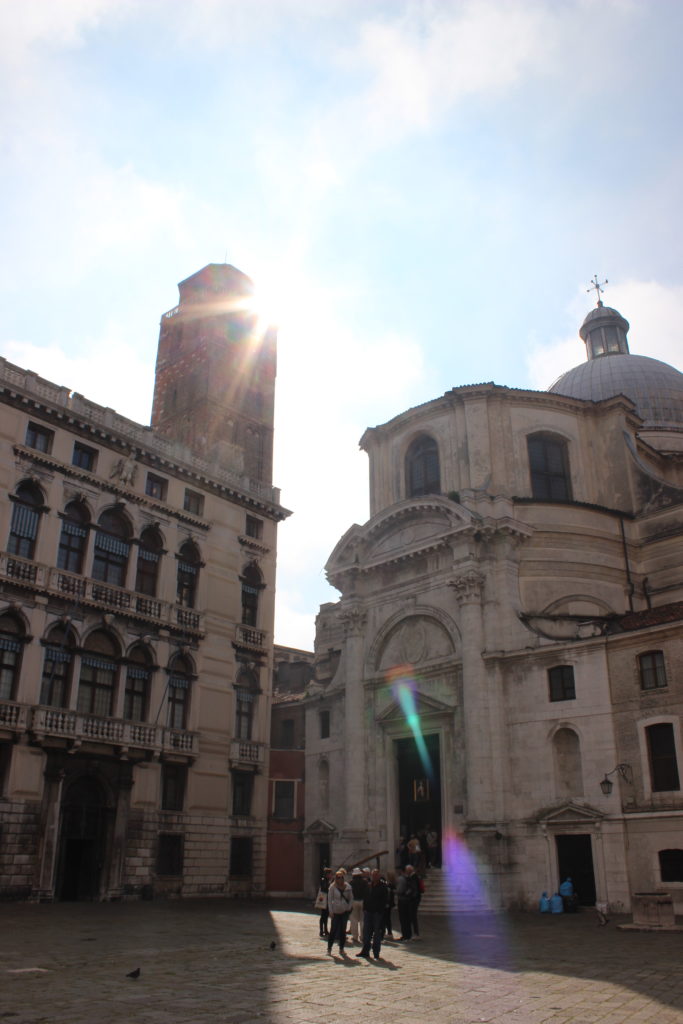 Venice is such a special place. Arriving on train and coming in on top of the water made it feel very different from anywhere I’ve ever been before. Aaron made a reference to the movie Water World since there was always a view of water no matter where you were on the island. We were here for two full days, which was a day longer than Milan and even though I feel like we saw everything there was to see, I still felt a little sad when we left for Florence.

It’s amazing how this city was built. It’s a concrete jungle with canals running through it. The ground is completely made of pavers and bricks line the canals with buildings going straight up about three to five stories. We happened to find a secretly large park near our house that was filled with trees, play areas and tucked between the tall buildings. There are bridges that connect each piece of land over the small to large canals. The streets are sometimes only one-person wide that go between each building and canal. I don’t know how people navigated around before GPS and Internet on phones. There isn’t a single car on the island. Near the train station there is a huge bridge and on the other side is where people leave their cars in a tall parking garage and walk over to Venice.

We only saw a couple super markets and asked a local if there are any gyms, which he said there are about 5 or so. He said they’re tucked away so it’s not obvious as to what it is, which it sounds like is pretty common with a lot of businesses here. He commutes from outside of the island and when we asked about how desirable it is to actually live in Venice, he said that it’s very touristy and not as many people live on the island. There is a tax that residents have to pay since everything is brought in on the boats. It’s very clean here. They have a trash system that picks up little bags of trash from each resident everyday and trash-boats take everything off of the island. 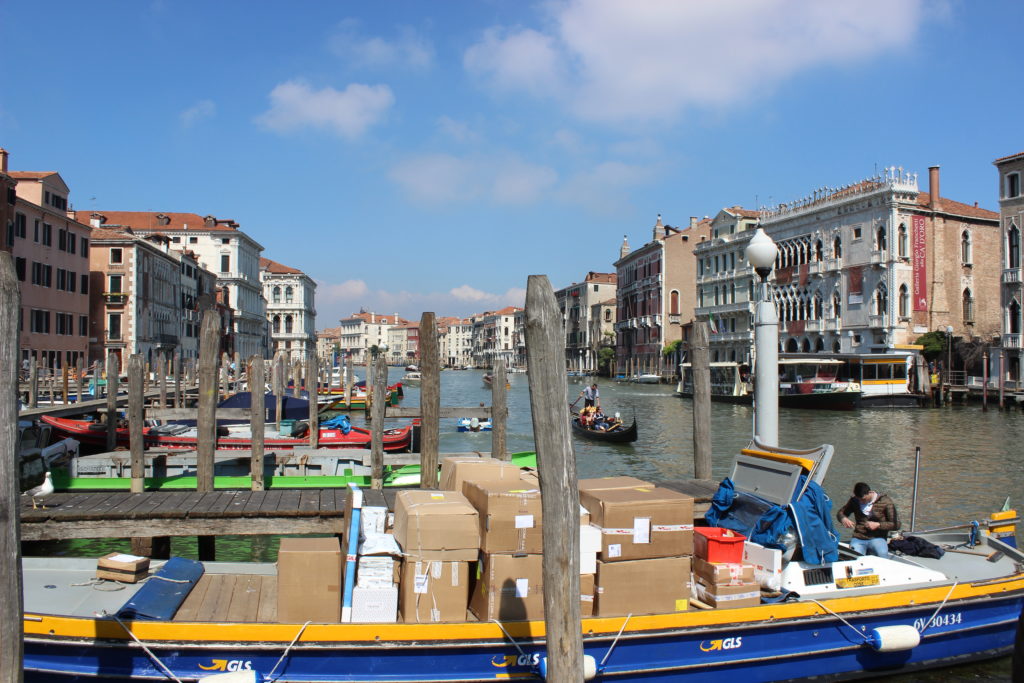 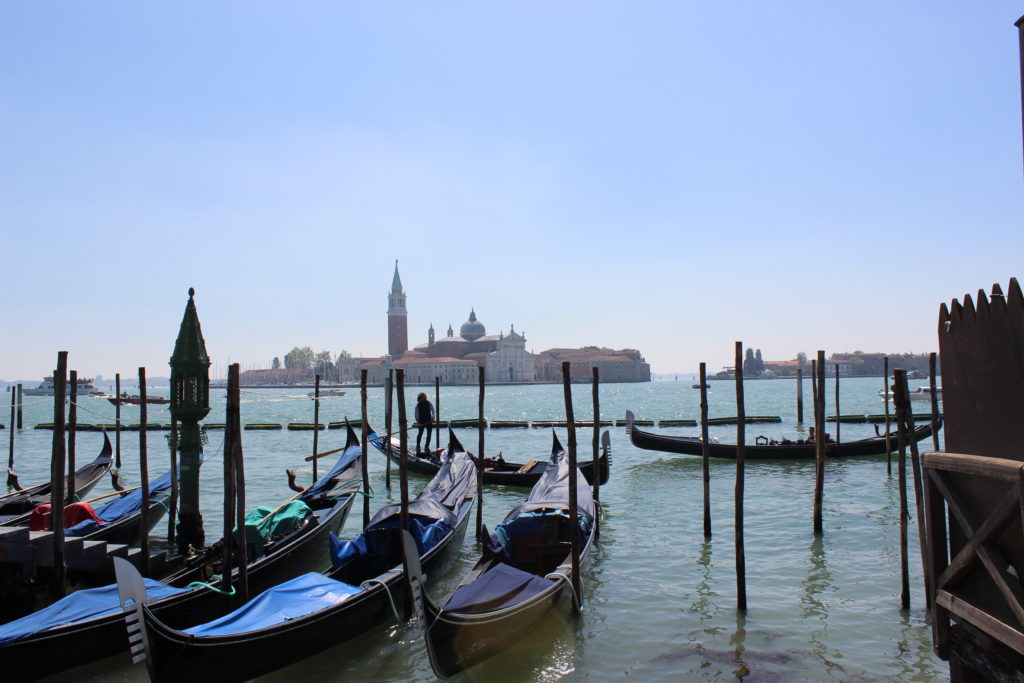 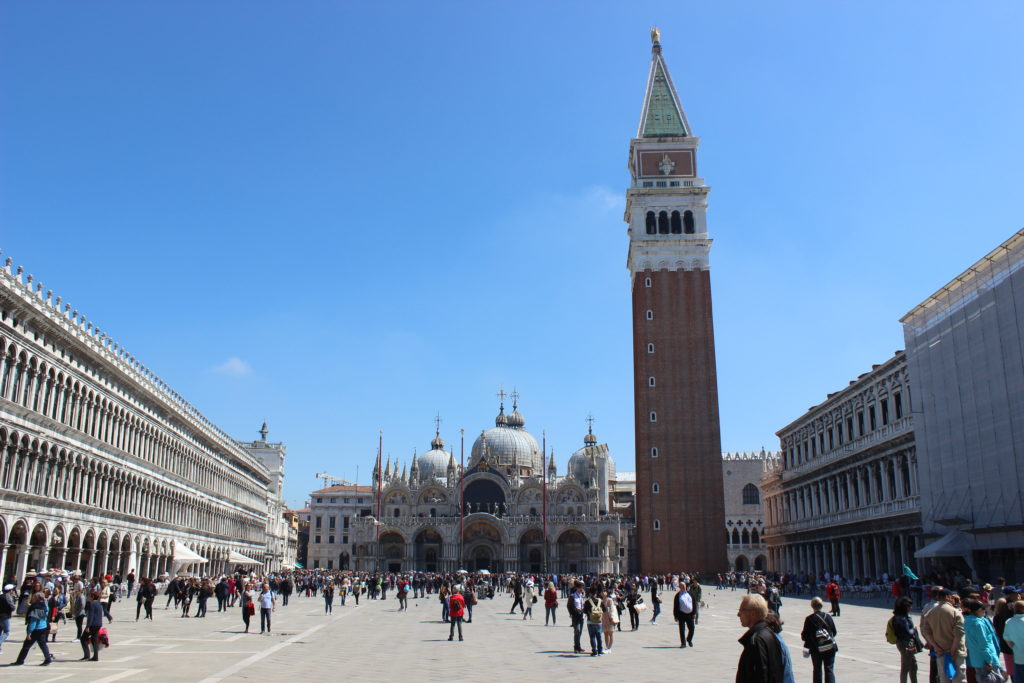 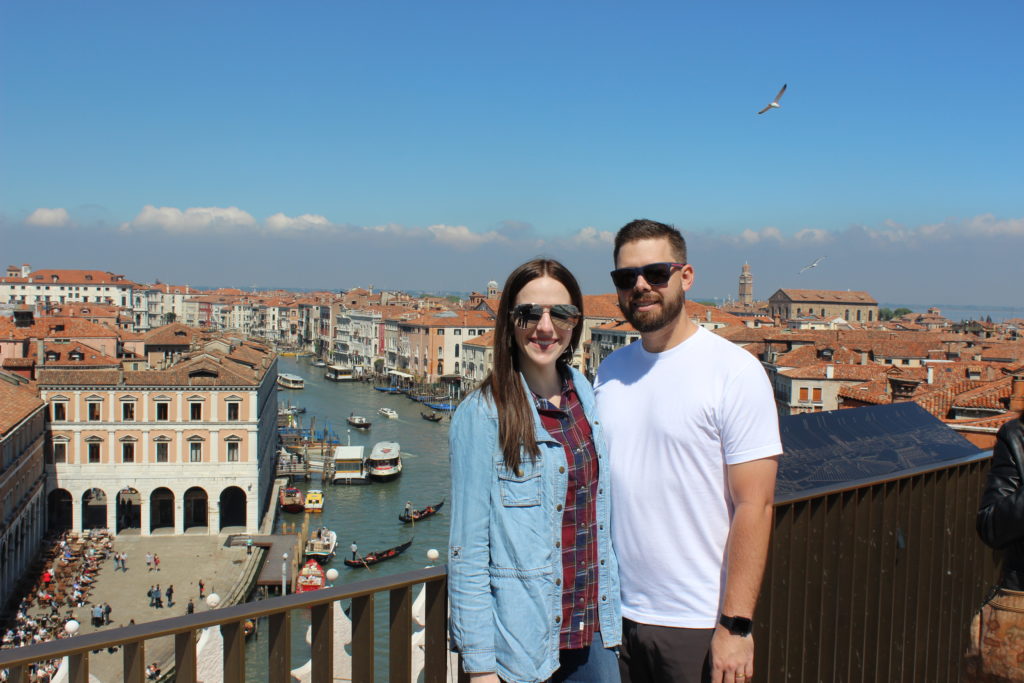 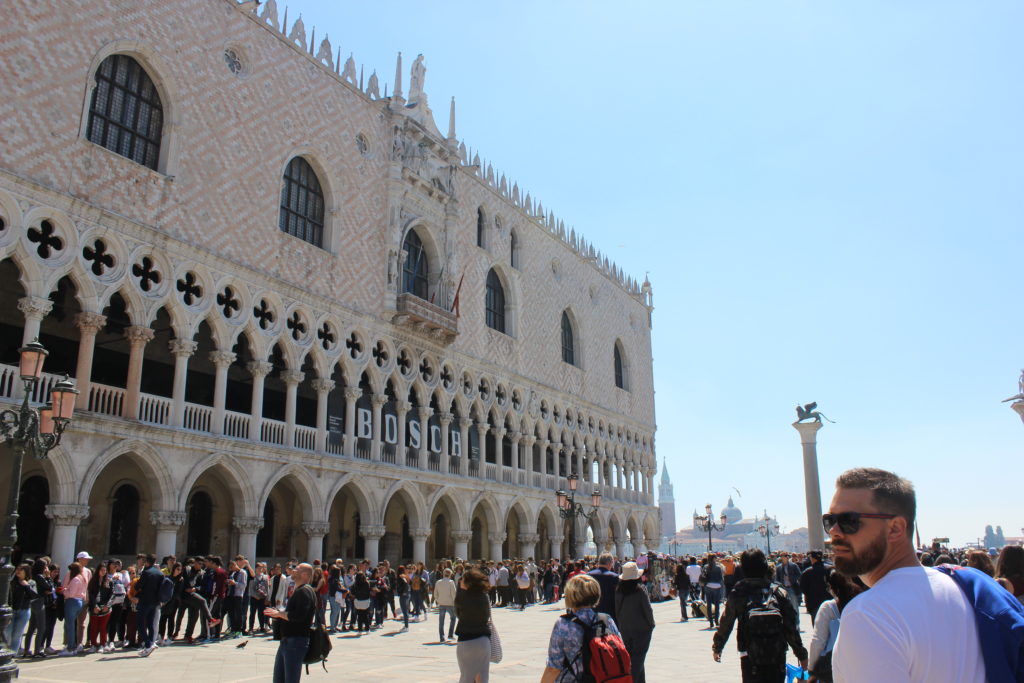 On Monday, May 1st, 2017 we arrived in Venice with the overcast and rain. Thankfully our Airbnb was only a 10 minute walk from the train station and super easy to find. We didn’t have to go over any bridges with our luggage, which we were very thankful for. We stayed at Fondamenta Cannaregio, 496 Venezia, Veneto 30121 Italy. It was in a little courtyard on the first floor. It had a refrigerator, small kitchen area with a pull out couch, washing machine, bathroom and a bedroom. It was perfect for us. We arrived on International Worker’s Day, which was eerie to see the streets so empty. We found one of the only restaurants that was open and had pizza for the first time during our trip so far. The restaurant was called Osteria Ai Canottieri.

Our second day or our first full day at Venice was gorgeous! We ended up walking 27,000 steps around the whole island. We woke up early for a photo shoot with a photographer from Shoot My Travel named Ksenia. It was freezing out that early, but once the sun was fully up it warmed up a lot. However, I still wore two jackets for most of the day. After our photo shoot we had croissants and cappuccinos at Dal Mas, which was a very popular Pasticceria and Cioccolateria (cafe/dessert spot) off of the main street from the train station and close to Scalzi Bridge.

Thankfully our Airbnb hosts gave us a map and marked a few of the key things to see while we were there. I was determined to hit every dot on the map. We crossed the bridge at Guglie and discovered a ton of little markets with fresh fruit and also these creepy masks that I’m guessing has something to do with Venetian history because they were everywhere. We continued walking through Cannaregio and found a gondola that only costs 2 Euros a person instead of 80 Euros a person like the rest cost. It was located on Strada Nova and Campo Santa Sofia. It took you across the main canal and you’re with other people, so you get what you pay for. If you want the personal and romantic gondola ride, then I wouldn’t suggest this for you. For us, it was perfect. We got the gondola feel and saved ourselves 156 Euros.

From there we found ourselves at a big fish market in San Polo and walked across the gorgeous and large Rialto bridge, which ends at a four story designer shopping center that reminded me of Henri Bendel’s on 5th Avenue in NYC. Fondaco Dei Tedeschi is rich with history and has a roof top terrace that overlooks the city and has gorgeous views of the canals and boats. There is a bar at ground level and Aaron would have stayed here all day, but I knew I had at least four more things to see before our tour was done.

We found our way to Piazza San Marco, which is a large square around a gorgeous cathedral and large clock tower near the edge of Venice with views to other islands across the way. I would compare this area to the area near Duomo in Milan, which is similar to Time Square in NYC. Very touristy, incredible to see and lots of designer stores. Aaron and I are not the type to ever stay in Time Square when visiting NYC. We’re the type to stay a little off the beat and path that is less expensive and allows us to feel like we’re locals rather than tourists, which is exactly where we stayed (near the Crea water bus stop.)

Now, this is the part of the Kat and Fox walking tour where we back tracked a bit and probably earned most of our steps. It took us forever to find our lunch spot, which was in Castello. We wanted to go to A Le Tole, but they were closed for their “weekly rest.” Thankfully they have a sister restaurant, called Alla Corte, around the corner that was down a very narrow street. I got fresh fish and grilled veggies. Aaron got handmade pasta and meat sauce. Both were delicious. The bread was very dense and doughy. The restaurant felt very vintage and rustic.

We were right around the corner to a bookshop called Libreria Acqua Alta. It had books stacked from the ground to the ceiling with gondola’s and boats inside filled with books. There was a patio that had books stacked to create a staircase for you to walk up and see a view of a narrow canal. There was another area with open doors and a chair for you to cozy up and read with the gondola’s passing by.

We then walked back through San Marco and across the Ponte del’ Accademia bridge over the Canal Grande. This was another large bridge near the University. We walked to the other side of this piece of land and found Nico’s Gelato, which apparently is a famous spot. We sat near the water, soaked up the sun and enjoyed a Gianduiotto, which is an ice cream sundae with chocolate/hazelnut ice cream and whipped cream. It was pretty expensive and I definitely think there are better gelato options out there, but the view was hard to beat.

Finally, we walked through Dorsoduro, Santa Croce and back over Ponte degli Scalzi (Scalzi Bridge) to the train station and back home. This part of our tour was a bit challenging because Aaron’s phone died and he only had a map to rely on. Plus, our legs felt like they were going to fall off. Thankfully, I wore my Nike Free Knit’s this day. We finished the evening with Take-Away pasta from Very Good, which was SO delicious and directly across the canal from our house. I had gnocchi and Aaron had Bigoli in Crosta, which is hand made pasta with meat sauce inside a pita pocket made of pizza dough. Pretty much like a giant hot pocket.

Other recommendations… Luna Sentada for local food at a tiny and adorable old brick restaurant near San Marco. It was recommended to us as the best meal of a friend’s trip who had been there recently. There is also a wine bar nearby. Ristorante Alla Conchiglia that is on a little canal with cute lanterns and has great ambiance. Venice is known for the fish house special called Turbot. Hotel Danieli has an incredible rooftop to enjoy during lunch or over drinks. Another roof top is at the Hilton hotel. 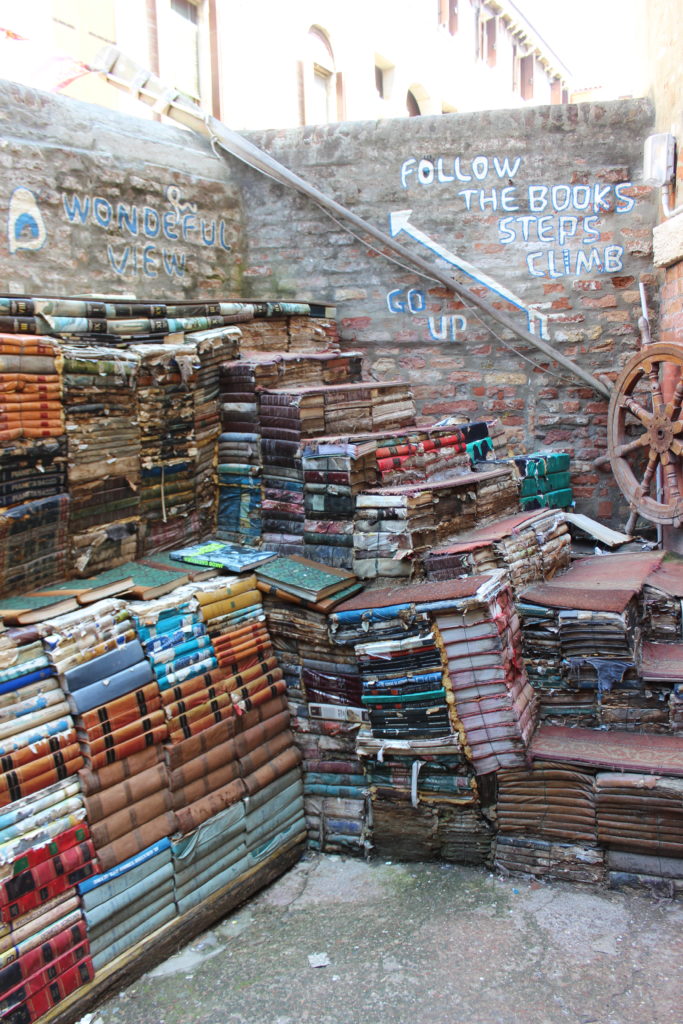 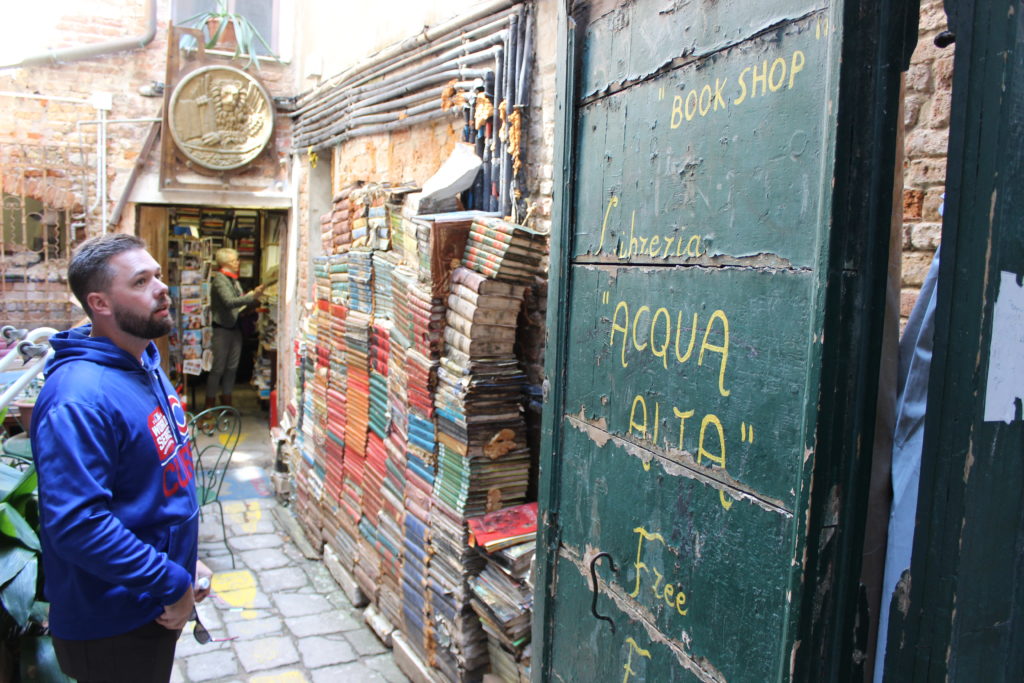 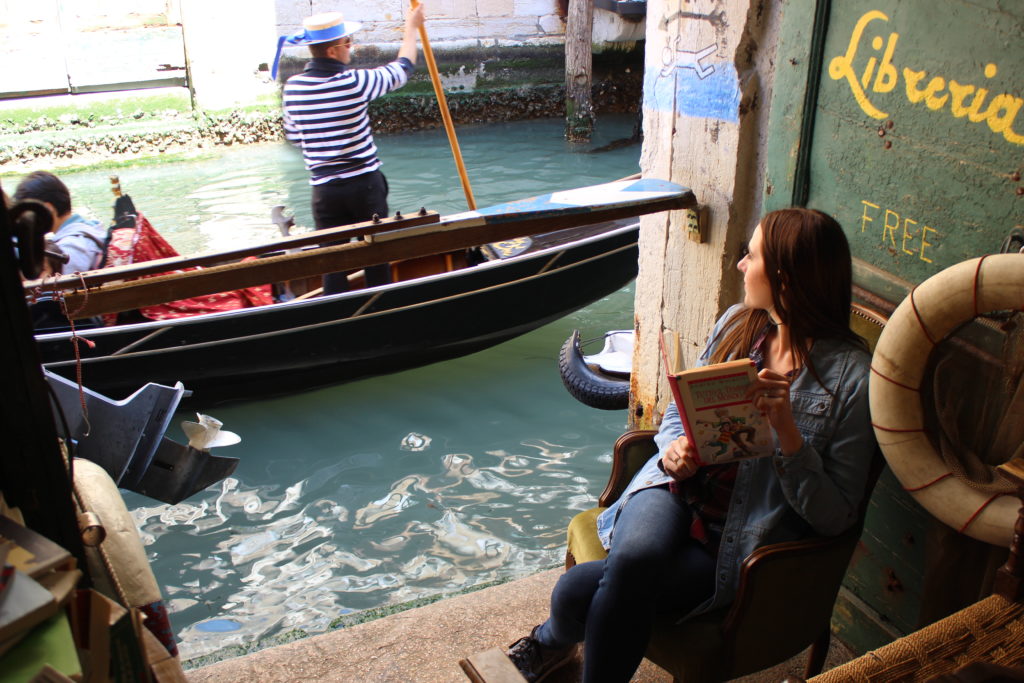 It seems like everyone traveling to Venice from outside of Italy speaks English, so most people here use English as the common form of communication.

In Venice the fashion is a bit more behind than the fashion that I saw in Milan. It seemed like the short boy hair cut was very popular with Venetian woman. The fashionable sneakers and skinny jeans weren’t as common here. Sneakers, more like running shoes, were still popular, but more locals wore the low waist flare jeans like you would see back in the mid-2000’s. Leather moto-jackets were very popular here.

In continuation from my Milan write-up, we learned that purchasing a Eurail pass is best when you want to book your travel on a flexible schedule or if you want to get off the train on multiple stops in one travel day. For us, we had a specific schedule and were taking the train from one city to another city and getting off, so the Eurail pass was an unnecessary expense. Also, it would have been cheaper if we purchased the train tickets only. Thankfully, the train station’s customer service representative was able to find discounts on business tickets for us and discount 20 Euro off our tickets since we paid 20 Euro for the reservations only when we purchased the Eurail. Confusing, right?

If you’re familiar with getting around on the subway, the L-train, the BART, or even the DART, then you would have no problem figuring out the water bus system here. It’s easiest to buy the water bus tickets before you leave the train station. Also, a day-pass or 2-day pass is the best bang for your buck since you’ll be transferring between different water bus lines to get to Murano, Burano and Torcello.

Another lesson we learned in Venice is that your GPS on your phone is not always accurate. It has a hard time reading exactly where you are. Also, the street names on the maps and on your phone doesn’t always match exact to what is painted on the walls. 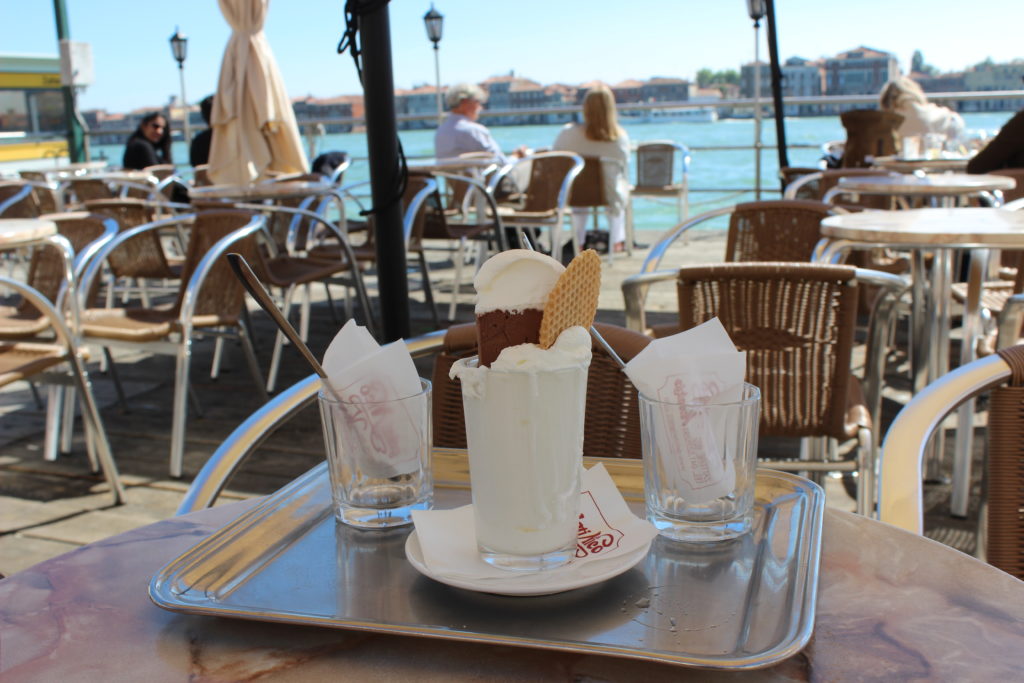 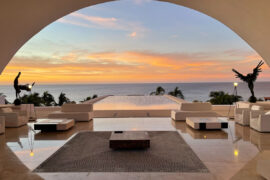 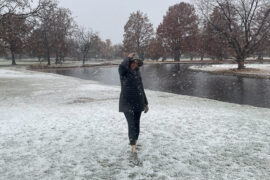 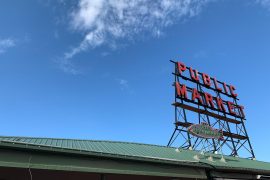